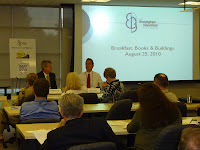 Wow! It's hard to believe that Labor Day is only a week away. Goodbye, summer — hello, fall. Goodbye, lazy days at the beach — hello, back to school. For the majority of students, the day following Labor Day is the traditional start of the school year. Thank Michigan's tourism industry for the late start in an effort to squeeze those last remaining vacation dollars out of us.

But parents whose kids are being educated in many of the area's outstanding private schools don't have it so lucky. Those schools either have already begun the new school year, or are about to next week. For them, those lazy days of summer already have come and gone.

The chamber helped kick off the new public school year on Wednesday with a new program, “Breakfast, Books and Buildings.” We brought together the superintendents for both the Birmingham and Bloomfield Hills public school districts to give their customers a sneak preview of the coming year. Both districts face considerable challenges in the coming year, but it was refreshing — and encouraging — to hear both David Larson from Birmingham and Robert Glass from Bloomfield Hills talk with such enthusiasm and optimism about the new year. It was a great event that the chamber hopes to repeat again next year.

Joe Bauman is president of the Birmingham Bloomfield Chamber. He welcomes feedback at joeb@bbcc.com.
Posted by Joe Bauman at 11:22 AM