Good news is a welcome change 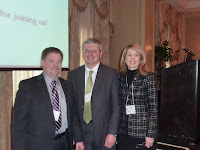 We continue to see signs that our state's woeful economic condition is starting to slowly, gradually improve. That observation was somewhat verified on Thursday at the Chamber's Economic Forecast Luncheon hosted at the Townsend Hotel.

Both featured speakers — Paul Traub from the Federal Reserve Bank and George Mokrzan of Huntington Bancshares, predicted a somewhat rosier picture of the state's economic condition in 2012 and beyond. Sure, the state and our region continue to suffer challenges with our unemployment rate and home foreclosures, but other factors such as manufacturing output are on the rise. And the recently announced bonuses being paid out by the Big Three automakers should provide a decent, short-term stimulus to the local economy.

The nearly 100 attending seemed eager to take away any bit of good news they could get. And they were not disappointed. I think people are tired of being negative and being surrounded by negative news. They want desperately to be able to be more positive about their own future, but also the future of the place they call home. My guess is that is why Chrysler's “Imported from Detroit” ad that ran during the Super Bowl made such a huge splash and was the talk of the town on Monday.

People want to have something to feel good about. And even if it does not translate directly into economic prosperity, there still is great value in having a positive attitude about where you live, play and work. Click here to read complete article. Joe Bauman is president of the Birmingham Bloomfield Chamber. He welcomes feedback at joeb@bbcc.com.
Posted by Joe Bauman at 3:21 PM