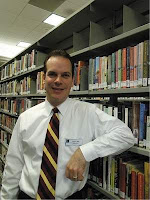 Larry Neal, this year's Birmingham Eccentric First Citizen, knows something about libraries. And he loves them.

So when Bloomfield Hills, his hometown for 29 years, broke with the Bloomfield Township library eight years ago, he, like many residents, felt adrift. And when opponents of a library agreement spread information that he felt was incorrect, he was moved to act.

“That sort of started it for me,” Neal said. He met with some like-minded neighbors, including then-mayor Dave Kellett, approached the Bloomfield Hills City Commission and the township library board to possibly hammer out an agreement.

“We did come up with a proposal in 2009,” said Neal. That was in March of that year and by May it was on the ballot. “I was organizer of the millage process,” Neal said. He brought friends and neighbors into the process, but there just wasn't enough time between March and the election in May to sell the proposal to the community. It lost by just 90 votes.

Still, Neal said, “I was thrilled to see that this could progress this far.” And he was encouraged not to give up.

That led to the second millage effort, a massive (by Bloomfield Hills standards) campaign effort, including lawn signs and door-to-door visits. “I hate lawns signs,” Neal said. “But I ended up designing one.”

It all came to a head at Northern Lakes seafood restaurant on Tuesday, Nov. 8, where Neal gathered with a small group of friends to anxiously await the results of the millage vote. And anxious it was, early result were extremely close, with the yes votes slightly ahead. The tension was lifted a short while later when the results came in — the three-year .39 mill question had passed. It wasn't an overwhelming victory — 548 to 509 votes — but it was enough to allow the city to execute a contract with the Baldwin Public Library. At last, the city had its own library again.

“I'd like to say I was relieved,” Neal said. “But three years is not a long time.” He's advised millage supporters to keep their lawn signs handy for the next go-round.

That 84,000-square-foot facility is state of the art, even offering services for the blind. Some days the library is so packed that there isn't room for cars in the lot. That alone, he said, shows that libraries aren't obsolete or even threatened by today's modern technology.

Still he plans to make people aware of what the Baldwin Library has to offer. That shouldn't be too difficult. Bloomfield Hills residents already have flooded over to Baldwin to get their library cards. And they thank Neal.

“City residents have use of Birmingham's Baldwin Public Library because of Larry's outstanding leadership and perseverance,” said Mary Joseph, “a proud Baldwin library card holder,” in her nomination of Neal for First Citizen.

“He has improved the quality of life in our community through his tireless volunteer efforts to lead the “Library YES” vote and should be recognized for his exceptional service to our residents. Because of Larry, we have a happy ending to the Bloomfield Hills library story.”

Her comments were typical in the dozens of nominations for Neal that were submitted.

“Without Larry's dedication to the cause he so firmly believed in, I do not think that we would have a contract with the Baldwin Library today,” said Carol Young, in her nomination of Neal. “My family and I would like to recognize Larry with the prestigious First Citizen award because he truly led (in first position) the team that worked with him to get the contract with Baldwin. I signed up for my library card on Nov. 15 at 11 a.m., the first day of our contract.”

That tied into exactly the message Neal plans to deliver: “Get your library card, and I'll see you at the library.”