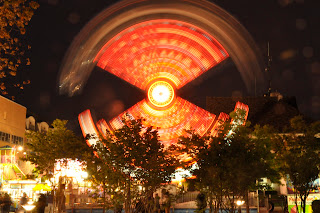 Two of the Birmingham Bloomfield Chamber’s signature events are celebrating significant anniversaries in 2013. We are especially proud of the fact that both events – Village Fair, which turns 50 next year, and Vine & Dine, which is marking its 10th anniversary – not only support the Chamber’s operations but raise thousands of dollars for local charities and nonprofit organizations.
The Village Fair truly has become part of the fabric of the greater-Birmingham community. Each year we hear stories from fair-goers of how they went to the fair as children, and now they look forward to bring their children to the fair. The Village Fair really is a community fair, held smack dab in the middle of downtown Birmingham, and drawing an audience made up mainly of neighboring residents.
Thanks in large part to Chief Executive Officer Danny Huston and his North American Midway Group’s generosity, the chamber has distributed grants totaling nearly $80,000 to our nonprofit partners just since 2008. Huston believes the Village Fair is one of the longest-running carnivals in the entire country, and said Birmingham always is one of his team’s favorite stops on the annual circuit in large part due to the warm reception they receive from the community.

We at the Chamber already are working on making the 50th-annual Village Fair the best ever, and are looking to expand the role of our nonprofit network to help spread the word of all the terrific work they are doing to help those in need and improve the quality of life in metro-Detroit. The 2013 Village Fair is scheduled for May 30-June 2. Mark your calendars now and plan to join in the celebration.
While the Village Fair allows the Chamber to showcase our nonprofit partners, Vine & Dine shines the light on the dizzying array of restaurants and beer and wine retailers and distributors in our membership. We are deeply appreciative of our members who donate not only their culinary masterpieces at the event, but also staff time which allows us to partner with Gleaner’s to provide thousands of meals to needy families in the area. And of course, our corporate sponsors play a huge role in making the event a financial success.
Nearly 400 guests attended this year’s Vine & Dine, held Sept. 5 at the Birmingham Bloomfield Art Center, and we are looking to “kick it up a notch” next year in honor of Vine & Dine’s 10th anniversary. Stay tuned for more details.

Joe Bauman is president of the Birmingham Bloomfield Chamber. He welcomes feedback at joeb@bbcc.com
Posted by Joe Bauman at 1:10 PM