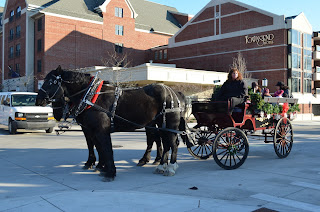 Above: Horse and carriage ride at the Birmingham Principal Shopping District

January is my least favorite month. The holidays are over, there are no work breaks, and it typically is the longest, darkest, coldest, most depressing month of the year.

Dark, dreary, winter weather also presents a challenge for downtown shopping districts like Birmingham, whose merchants need to compete with stores tucked inside, warm, cozy malls. It is tough to get excited about a shopping experience when the cold is nipping at your nose and you are trying not to step in snow and slush.

Both the city of Birmingham and the Principle Shopping District have been working hard to improve the overall shopping experience in town, and there is clear evidence their efforts are paying off. There is near universal agreement that the downtown shopping district looked absolutely terrific during the just completed holiday season, and there is cautious optimism that even better days are ahead.

Further evidence was received at the PSD meeting on Thursday, when board members and other city officials reviewed results of a major marketing survey that was conducted over several dates in August and September.

The marketing analysis, conducted by Sylvan Lake-based The Strategic Edge, was chock full of affirmation the city’s efforts to improve the physical appearance of the downtown and ease parking concerns are being recognized – and appreciated – by shoppers and guests. And individual merchants also deserve credit for keeping their storefronts clean, bright and welcoming, and working together to support special events and programs that draw people to the downtown.

The marketing survey was done on the streets of downtown both during daytime and evening hours, and was a completely random sampling of shoppers, dining, and walkers who agreed to spend a few minutes talking about what they liked, and disliked, about downtown Birmingham. More than 500 people in all were included in the survey findings.

Asked what they liked about the downtown, about 44 percent said they enjoyed the overall atmosphere and appearance of the central business district, which represented a huge jump from the 30 percent who gave the same response the last time a market study was conducted in 2006. Clearly, residents, shoppers and guests have responded to the city and PSD’s sustained efforts to beautify the central business district through the expansion of Shain Park, the flower program, holiday lights and overall maintenance and upkeep of sidewalks and other public areas.

Shoppers also are responding to the city’s aggressive marketing of the five shopping decks serving the downtown, and the “two-hours-free” incentive. About 60 percent of those interviewed said they used the parking decks when coming downtown, another considerable increase from past surveys. Moreover, more adjacent residents are finding reasons to visit their downtown, as evidenced by the fact that nearly 15 percent of those polled said they walked to their downtown location.

No one likes to pay taxes, and I am sure that given a choice, many shopkeepers and landlords located in the PSD boundaries would pass on paying the special assessment that funds all of these efforts. And one needs to look no further than the market survey to see the city is providing an outstanding return on the investment to keep the central business district a safe, clean, attractive and thriving area for business to do business and residents to have a wonderful shopping, dining and entertainment experience.

Joe Bauman is president of the Birmingham Bloomfield Chamber. He welcomes feedback at joeb@bbcc.com
Posted by Joe Bauman at 1:41 PM